Ian’s Route Around the World 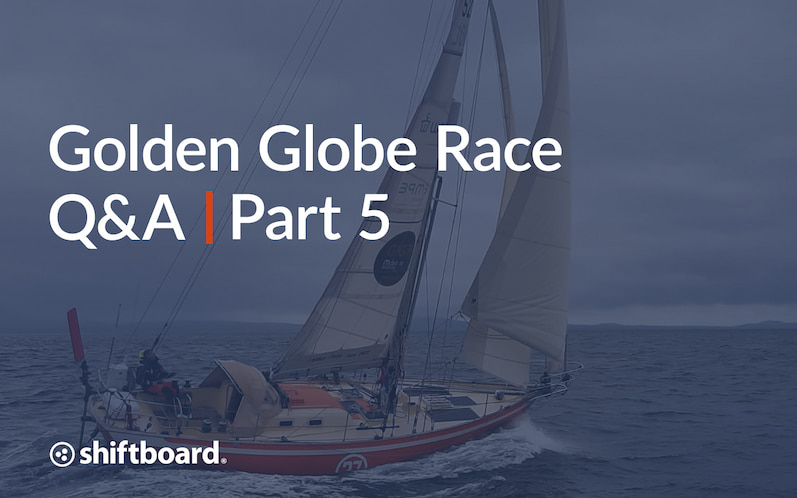 The Golden Globe Race is now just around the corner! For our last Q&A, Shiftboard’s director of marketing, Gina Brodie, asked Ian to break down the race’s route and his expected timeline for sailing around the globe. Join us in wishing Ian a fantastic start to the race on September 4! For the previous four parts in this Q&A series, please visit the series buttons linked below.

Gina: So, is this intentionally starting on September 4 so that you have optimal sailing weather for the trip?

Ian: It is, yeah. If you take this route around the world, you need to be in the southern oceans in the summertime (and take summertime with a pinch of salt). You can’t be there in the wintertime, let’s put it that way. If you have any chance of circumnavigation, you must be in the southern hemisphere in summer. It’s really important to me to be past Australia by the end of December, so I can get underneath Cape Horn before I run out of the southern hemisphere summer.

Gina: Can you give us a breakdown of your route?

Ian: Sure, sure. We leave from France, and then we head across the north Atlantic down towards the equator. With luck, you very quickly get into something called the “Northeast Tradewinds,” which is a nice form of sailing. There can be big storms in the north Atlantic, but the piece of the Atlantic that the race crosses initially should be relatively pleasant.

Ian: Then you’ve got the “doldrums” everywhere. Lots of people have heard of the doldrums. That’s a challenging area of very light winds or no wind at all. It’s a game of luck about where you hit the doldrums in a given year because it is constantly in flux. The location changes every season, and because we don’t have any weather predicting tools on board, we don’t get the chance to steer our way carefully around [the doldrums] as modern races do. So, what do you do when there’s no wind? That’s maddening. That’s very difficult. You’re in the tropics now, so it’s really hot, too. But there are also very violent squalls that come through. You can go from zero wind to 30 knots, and it’s almost like a storm. It’ll last, say, 20 minutes, and then it’s gone. So, it is a very squally area as you hit the tropics. That’s the north Atlantic; then we head from Europe towards Brazil.

Ian: Think about a diagonal line going across the north Atlantic, and then from the northeast of Brazil, picture another diagonal line heading towards South Africa. From there, we’re into the south Atlantic. We’ve crossed the equator; we said thank you to Neptune for getting us that far, and we’re headed south. You hear sailors talk about “the south,” and generally, what they mean is from about 35 degrees south and further down. So, as you come down to the south Atlantic, things can get increasingly challenging. There’s a whole area where there is also no wind. Here it’s called the St. Helena High — and it’s a trap. You can sail in and then get stuck for a long period of time. So hopefully, I sail around it.

Ian: Stuff starts to get more difficult as you reach South Africa and the Cape of Good Hope. It’s a very serious patch of water down there. From there, you cross the southern Indian Ocean between South Africa and Australia. That area is known as the “roaring forties,” which refers to the strong winds between 40 and 50 degrees south.
Ian: I’ll go underneath Australia and New Zealand, and I’m in the southern Pacific Ocean. That whole period is multiple months in the deep south. We’ve gone from champagne sailing in the north Atlantic to increasingly challenging sailing in the south Atlantic, and then you’re in survival mode for three or four months until you reach Cape Horn in Chile. You have to dive deep south to get around Cape Horn, and, you know, that’s classically the most difficult bit of the ocean for sailors. It’s a difficult sea with weather front, after weather front, rolling through. Each weather front gives you a battering and leaves behind huge, huge waves. Once you make it through, hopefully around June, we’ll be sailing back up to Europe and the race’s finish.