Ian’s Life as a Solo Sailor 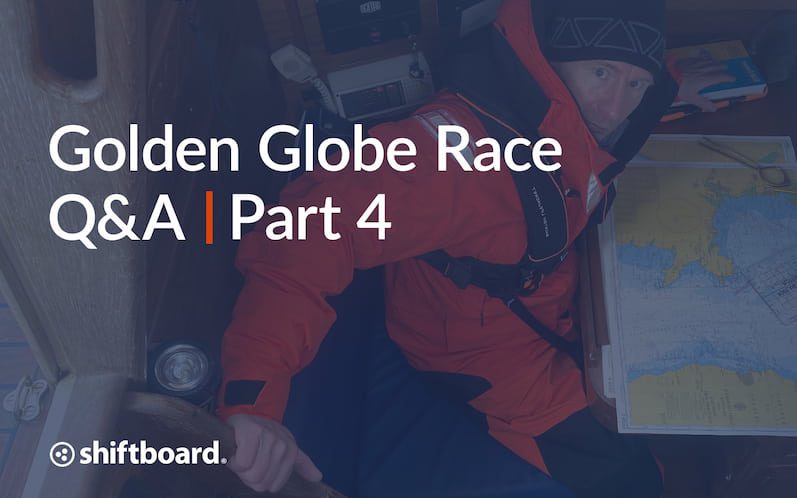 Ian Herbert-Jones is the former chief revenue officer here at Shiftboard, and we’ve sponsored his entry into the 2022 Golden Globe Race (GGR) around the world. GGR is a retro, solo, nonstop sailing event that kicks off on September 4. Our director of marketing, Gina Brodie, interviewed Ian from his home in the UK. In Part 4 of our interview recap, Ian discusses the challenges he anticipates as a solo sailor.

Gina: So, you are allowed radio communication, correct?

Ian: With other competitors, hopefully. And potentially other ships nearby, too.

Gina: Can that happen any time during the day, or is it scheduled?

Ian: We’re allowed a high-frequency radio, which is like a long-range radio, but it’s only for marine frequencies. If you can get somebody to talk to you, you can speak on that anytime you like. You’d need to be within range, and someone else listening is required. It’s not like a mobile phone where you can just dial and connect to someone directly.

Ian: The other communication we get is a scheduled call to the race control every week. This communication is part of the modern safety blanket and keeps the race in the public’s attention. I have a satellite phone on board for emergencies, and it’s locked to one number. So, I can’t dial an Uber eats or something like that. I call race control once a week, which is compulsory, because the serious thing is, Gina, they need to know you’re there. The boats get tracked, but not me personally. So, my boat could happily sail itself off and leave me behind. That’s the sort of the dark reason why we check-in, but it also provides an opportunity for updates on how things are going.

Gina: These are going to be public updates, correct?

Ian: Yeah, that’s right. They are almost like mini-interviews — a little 15-minute interview once a week, tears and all. It depends on what’s going on. And the organizers can share them publicly. They’ll be as live as you get, really, and they’ll probably be quite raw from what I’ve seen in the past. It’ll be interesting to know what other people think of myself and other competitors and how we’re talking. Cause remember, we will have been alone for that time, right, and suddenly the phone rings, and you’ve got these 15 minutes — if you can maintain a signal. I think the updates will be quite a raw download.

Gina: As you’re thinking about the race and preparing for it, what is your biggest fear regarding a problem you might face?

Ian: I think practical fears of mine include heavy weather to the level I haven’t seen before on this boat. Knowing I’ve got the skill set, the boat, and so on, to handle that is a very practical concern. Believe it or not, making landfall is another. In the race, there are certain places where I have to come close to shore for a photo gate. That’s a hazard. I’d much rather be offshore — so that worries me. I see those photo gates as challenges. I’m not particularly worried about falling off the boat. People ask if I’m concerned about that, but it doesn’t keep me awake at night. I’m very careful. And then there’s the, you know, the element of the loneliness. I’m not usually alone; it’s not my style. So far, I’ve found that I’m fine with it, but you know, the 20 days of training vs. 200-plus days in the race is a big difference. I am a little bit anxious if that’s going to work out for me and if I can handle that.

Gina: Have you trained in any way to deal with the aloneness?

Ian: The sailing I’ve done over the last year helped with that. The training kind of broke the ice on that and tested it. I didn’t immediately lose my mind over it. So some of the training requires that you go out and sail alone. I don’t think you can train for a long duration other than being quite calm in yourself and being quite content on your own and with your decision-making.

Ian: Noise surrounds us at all times in our lives. And we’re very good at reacting to all that noise. That’s what we do all day. So initially, you get a bit of withdrawal symptom, and then once you start to get used to that quiet, are you feeling lonely?

Ian: I think not being able to talk to my family will be quite strange, but I’ve chosen to do this. It’s a massive privilege to have this chance at an organized circumnavigation. So for that side of it, I think I’ve got the right mindset. I do struggle with not being able to ask for second opinions. I’m so used to sharing ideas with people. When you say, “Hey, how are we gonna fix this?” even if I think I know the answer, Gina, it’s nice to ask what you think and then go, “Oh, I hadn’t thought about that,” and suddenly my idea doesn’t work. That’s a weird thing for me; that’s quite a strange thing. Being on teams all my career to suddenly go, ah, I am now a team of one. Wow.

Gina: I guess it’s an exercise in learning to trust yourself in some ways, right?

Ian: Yes, and to be accepting of your own decisions, whether right or wrong, right? You’ve got to live with that, and it’s pointless beating yourself up. I think being resilient is key, right? You have to get over it, whatever it is — really quick — because you can’t carry it with you — there’s just too much going on. There’s too much at stake. I think it’s important that you keep yourself very much in the present.